This mode allows you to jump into battle right away without fiddling with complex settings.
The battle rules are set to "Battle Royale".
The stage will be selected at random.

This mode allows you to jump into battle right away without fiddling with complex settings.
The battle rules are set to "Team Battle".
The stage will be selected at random.

This mode allows you to play with friends and acquaintances via the internet.
If you wish, you can also play with anyone currently online, even if you are not acquainted.
Ninja-Gum will not be consumed in room battles. Furthermore, players will not receive rewards.

It is possible to watch Room Battles as a spectator if permitted by the host.
Only one spectator is allowed per battle.
While observing the battle, you can operate the camera and select from sky, stage (fixed point), and behind-the-player angles.
As well as selecting the camera from the menu, you can easily change your camera settings by holding the ZL button and then pressing the A button.

This setting allows you to filter for nearby players and battles.
It can be helpful in finding players and teams to arrange Room Battles.
This applies to players with the same IP address as you.

This mode allows you to fight a practice battle against a computer-controlled character.

Here, players who have been matched gather together, and can adjust their equipment before battle.
In Room Battles, you can adjust your teams, and the room host can change battle rules.
Players who are ready for battle will move to the Standby Dojo, where they can play around while waiting for others to finish their preparations. (*This does not apply to Training mode and when observing as a spectator.)
In the lobby room settings, you will be unable to adjust fixed assist code level and spectator permission settings.

This rule allows players to enjoy battling without worrying about ranks.
This is where you go to battle against players of all shapes, sizes, and skill levels.

Fight battles with this matching rule to increase your rank based upon your performance in battle.
This is a serious battle mode for those aiming to improve their rank and overall performance.

In this screen, players who are ready for battle can practice moving about while waiting for other players to finish preparing.
When the rules are set to Battle Royale, you can practice fighting against computer-controlled opponents.
When the rules are set to Team Battle, you can practice fighting against your teammates.
Furthermore, you cannot attack opponents in the circular area at the edge of the stage. Please use this space to communicate with your fellow ninja. 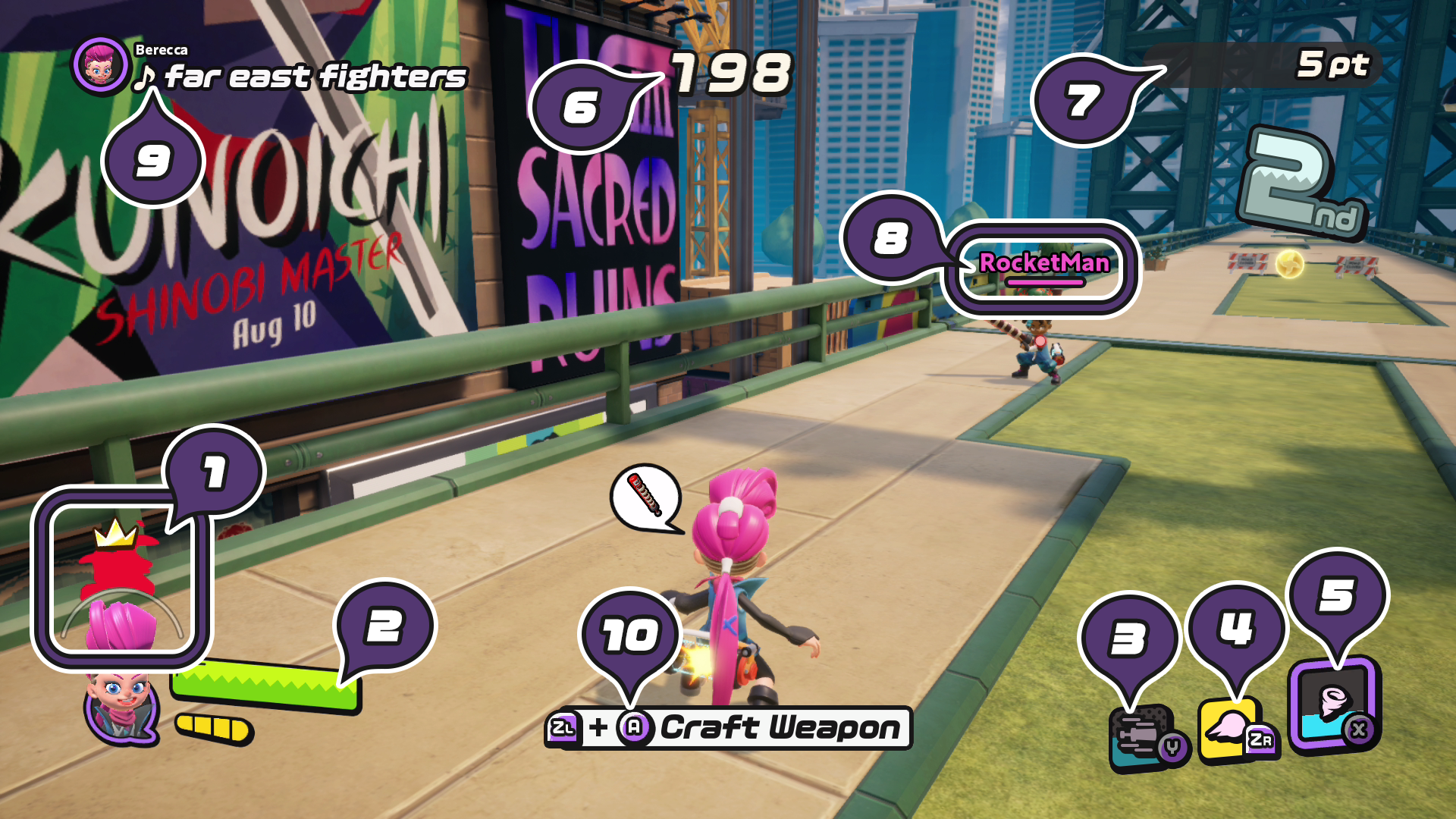 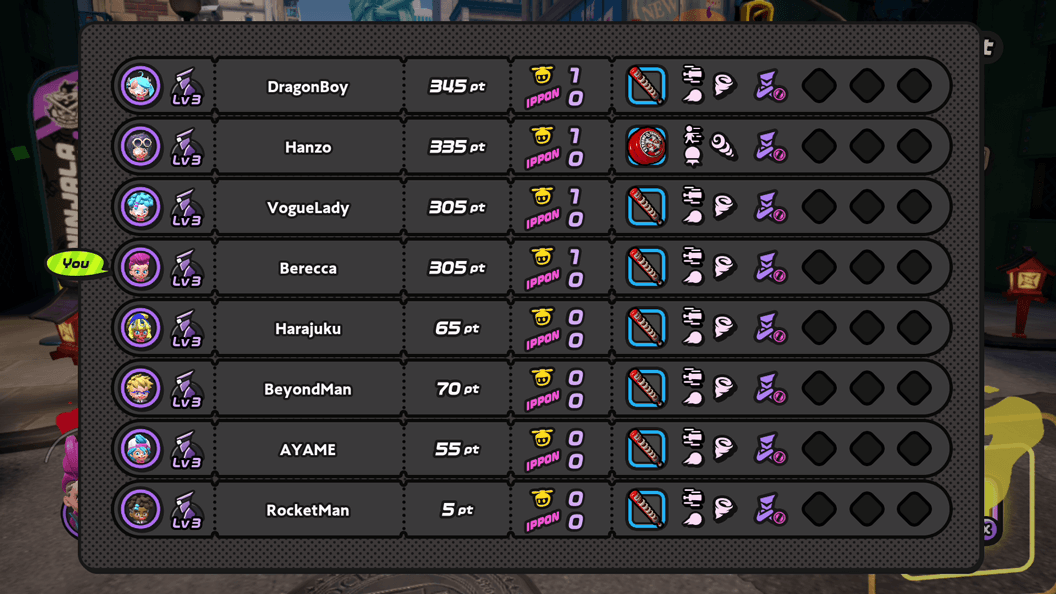 You can view information for all players in the current battle.

The background music may change during battle.
When the soundtrack switches, the track title and the name of the player whose theme it is will be displayed.

It is possible to recruit party members from your base.
You can access your closet and other menus while recruiting is in progress.
Once you have enough members, you will proceed directly to battle.

You will have the chance to vote on which stage you'll compete on.
The stage will be chosen semi-randomly from among all that received votes. The more votes a stage received, the higher the likelihood it will be selected.
For Room Battles, the host can select their desired stage.
If you have no particular stage preference, select Random.

The countries that correspond to each region of Ninjala are as follows:

* Players residing in countries other than the above will be assigned to one of the existing regions, and will still be able to play the game.

Players can enjoy interacting with one another in the WNA Resort visual lobby. You can also head to battle directly from the visual lobby.

Visual lobbies can hold up to 30 players in the same room. You cannot choose which room to enter.
* You will not be matched with players who are on your Switch's "Blocked Users" list if it can be avoided.
You can move and communicate within the visual lobby, but you cannot battle.

Invite fellow players from your base to ensure everyone enters the same visual lobby.
In addition, you can also head to battle together from the visual lobby.
You can recruit party members from players in the visual lobby with you as well as enter team battles with those members.

You can also return to the same visual lobby you were originally in (if there is a space available) by selecting "Cancel" from the results screen at the end of the battle.

Things you can do in the visual lobby

Things you can't do in the visual lobby

Things you can do in the visual lobby

Things you can't do in the visual lobby

An activity located in the WNA Resort visual lobby.
You can get items by tossing in Bronze Medals and making a wish.
The lineup of items you can receive changes every week, and it even includes Ninja-Gum that you can only get from the Goddess's Fountain.
You can toss in medals up to 10 times a day. The number of tries resets every day.
Plus, you will get an EXP Bonus in your next battle after tossing in medals. This bonus applies to all players in the same WNA Resort. 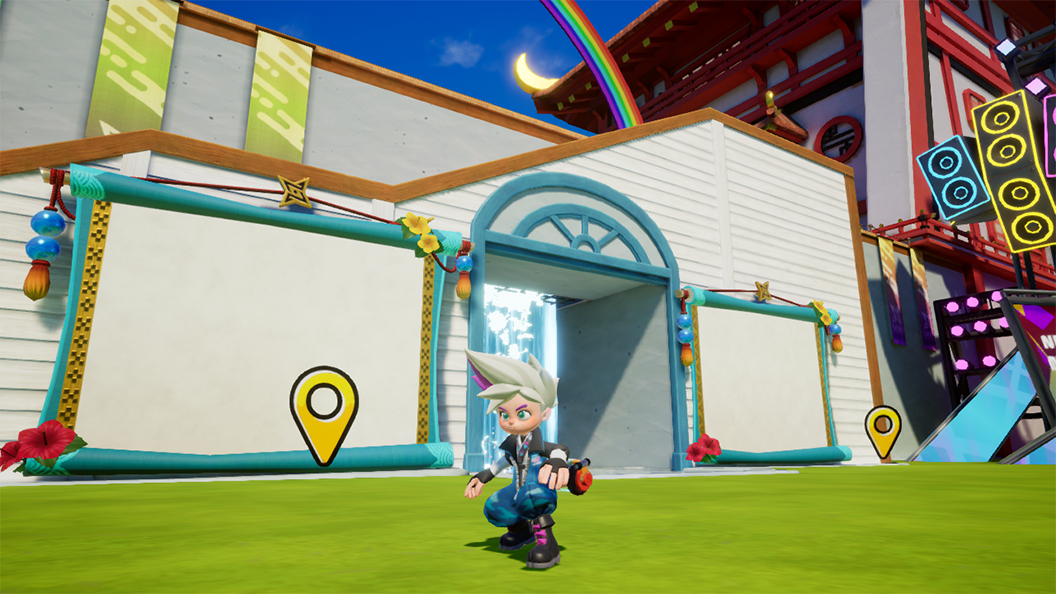 An activity located in the WNA Resort visual lobby.
You can place stickers that you own onto it.
You won't lose any stickers you use, so have fun with it!
Stickers placed on the Sticker Board will reset every day.

Return to the Top of the Online Manual