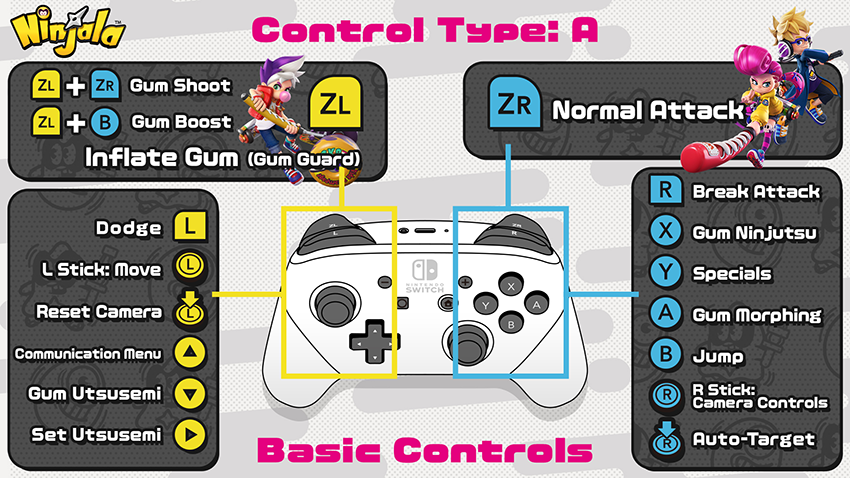 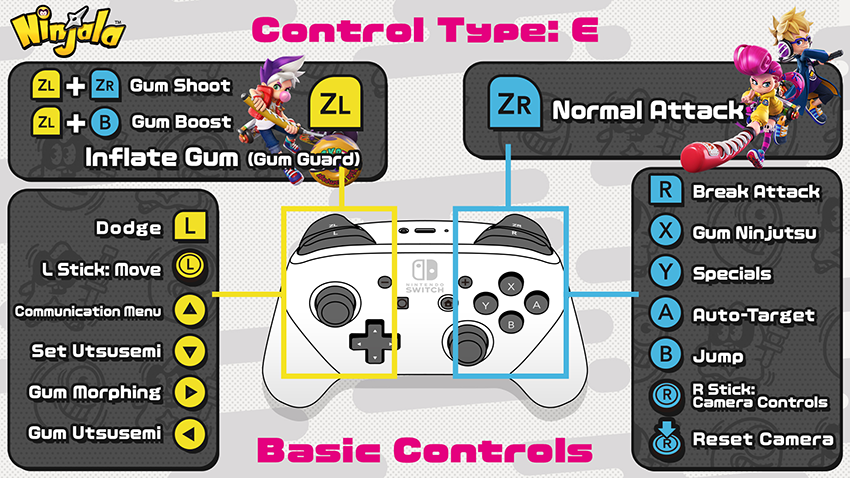 The presence of opponents will be indicated by the on-screen radar.
When far away, they will appear as weak flames. The flames will grow stronger as your opponent draws nearer.
The vertical positioning of an opponent may be determined by the color of their flame.
Opponents on the same level as you will appear in red. Those lower will appear in green, and those higher will appear in yellow.

About the Battle Menu

You can view information for all players in the current battle.
For more details, refer to the Battle Menu section under "Play with Others."

The Flow of Battle

Defeat drones to build up S-Energy. When your gauge is full, it's time to take out your opponents.
Accumulate enough S-Energy, and you can craft a big weapon. Defeat your opponent with a big weapon, and you'll score extra points.
Find opponents and take the fight to them by trying to score an IPPON.
If you find yourself in trouble, use Gum Morphing or other techniques to hide or shake off your foes.

What is an IPPON?

S-Energy (Shinobi Energy) is a special form of energy used to blow giant bubbles and perform special actions.
Your current S-Energy level is displayed at the bottom left of the screen, below your health meter. You will begin each match with 4 units of S-Energy.
Using certain actions (such as gum dashing or using S-Bursts) will consume S-Energy.
Defeating drones will increase your maximum capacity. Accumulate 8 or more units of S-Energy, and you'll be able to craft big weapons.
Depleted S-Energy will replenish itself over time, and you can collect the S-Energy scattered throughout the level to recover more quickly.

Do battle with 4 to 8 players.
The player with the highest score at the end of the match will be declared the winner.

You can do battle in teams of four on four, three on three, or two on two.
The team with the higher score at the end of the match will be declared the winners.

In free matches, victories and losses will not affect your rank.

Fight battles with ranked matching, and your rank will rise and fall depending on your battle performance.
Assist Code level will vary by player.

Reduce an opponent's life to 0, and you will K.O. them.
K.O. multiple opponents in succession, and you will receive a score bonus.

What is an IPPON?

Defeat an opponent from a parry state, from a Gum Bind, or using Gum Ninjutsu to score an IPPON.
Defeating an opponent with an IPPON will score you more points than defeating via a standard K.O.
You can choose the animation displayed when you score an IPPON from the list of IPPON decorations.

There are three types of standard attacks: normal, back, and wide.
The number of combo hits and variations will depend on your gum weapon.
In addition, there are attacks such as Break Attacks and Specials that vary depending on your gum weapon.

A parry occurs when two identical attacks clash with each other.
From the parry state, you can choose to unleash a normal attack, back attack, or wide attack.
If you press the L Button while parrying, you can consume S-Energy to escape!

The type of Specials you can use vary depending on your gum weapon.
Specials have a cooldown time. After using a certain Special, you must wait a period of time before using it again.

While blowing a bubble with Ninja-Gum, press the ZR Button to release a Gum Shoot.
Gum Shoots come in various types, each with different functions.
Gum Shoots have a cooldown time. After using one, you must wait a period of time before using it again.

If a player suffers a certain amount of gum damage via Gum Shoots, etc., they will enter a Gum Bind state, rendering them unable to move or act.
Defeat an opponent in a Gum Bind state, and you will automatically score an IPPON.

Blow a Ninja-Gum bubble and press B while in mid-air to execute a Gum Dash.
However, dashing consumes S-Energy, so there is a limit to how many times you can dash in succession.

Blowing a bubble with Ninja-Gum can allow you to defend against normal, back, and wide attacks.
However, if you are hit by a Break Attack, your gum will be broken and you will suffer a Gum Bind.

When attacked, you can spend S-Energy to unleash an S-Burst and parry your opponent's move.
Using an S-Burst requires 5 or more units of S-Energy.
However, be careful: if you are hit with a Break Attack while in an S-Burst stance, your gum weapon will be broken.

Big weapons are highly damaging, yield higher scores, and allow you to use their secondary ability.
Furthermore, big weapons will automatically defeat smaller weapons in a parry situation.

Take care, however, as gum weapons can be broken. If your gum weapon is broken, you will have to craft a new one, so be on your guard.

If you are hit with a Break Attack while in an S-Burst stance, your gum weapon will be broken.
Without a gum weapon, you will be extremely vulnerable, so be careful.

Use the following controls when Bumpy Accelerator is activated.

Using Turbo will reduce the time you have left to perform the special, but it will increase your speed and attack power.
Drifting not only allows you to turn corners at high speeds, but also activates a mini Turbo when you continue drifting for a certain amount of time.

・This gum weapon cannot perform back attacks or wide attacks.
However, it can shoot projectiles that can be charged up to three power levels by holding down the attack button.
The second and third levels will consume S-Energy when fired.
・A warning that shows your position will be displayed on your opponent's screen when you auto-target or attack them while fully charged.
So be careful when aiming at opponents.
・Combine with the L stick to perform 3 different Break Attacks.
Move the L stick up (or keep it neutral) to activate a Break Attack and shoot a projectile that can Gum Break.
Move the L stick left or right to activate regular close-range Break Attacks.
Move the L stick down to put up a shield to guard against attacks. You can counterattack with the attack button if you guard successfully.
・When the Thunder Cannon Special is equipped, tapping the Special button will put you in aiming mode.
A long-range beam will be shot after a certain amount of time. You can shoot quickly by pressing the attack button while aiming.
・Hold down the Special button to activate the Rapid Charge ability and recharge S-Energy.

Equip Shinobi Cards to gain access to a wide variety of skills.
Shinobi Cards can also be enhanced with Assist Codes to further heighten their effects.
Assist Codes can be leveled up by spending Ninja Medals.

Activate an S-Burst one time, even if your S-Energy gauge is depleted. Resets each time you respawn.

Use your ninja sense to detect opponents behind you.

About the Communication Menu

You can display the menu in-battle by pressing the Up Directional Button.
Select an emote or sticker by moving the R stick accordingly.
The L and R buttons can be used to toggle between communication menus.

From your closet, you can try on different avatar items.
Saving your favorite outfits as sets will allow you to switch between them in the Lobby.
Customizing your outward appearance and equipping avatar items will not affect your performance in battle.

- Rails
Ride them to their final destination. Push the left stick up to accelerate, and down to decelerate.

- Jump Pads
Hop on one to jump high in the sky.

- Dash Tiles
Hop on to dash at great speeds.

During battle, the theme song of the player currently in the lead will be played.
If you take the lead, your theme song will be played.
As well as setting BGM tracks from the Closet, you can create and edit BGM playlists using the Sound menu in the Mobile Menu.
You can also enable or disable this feature.

Training Mode allows you to fight practice battles against computer-controlled opponents.
This mode offers various settings that allow you to fine-tune the maximum capacity of your ninjutsu gauge and S-Energy, among other options.

Drones are special enemy characters scattered throughout each stage.
Defeating them will increase the maximum capacity of your S-Energy gauge.
Certain powerful actions can only be performed with a high level of S-Energy, so try to increase your capacity as soon as possible.
Furthermore, you can confirm the location and duration of drone appearances from the on-screen display.

Several types of drones appear depending on the chosen rule set. Each will have a different effect when destroyed.

Return to the Top of the Online Manual